Protesters fail to save mural from demolition at Logan Heights school 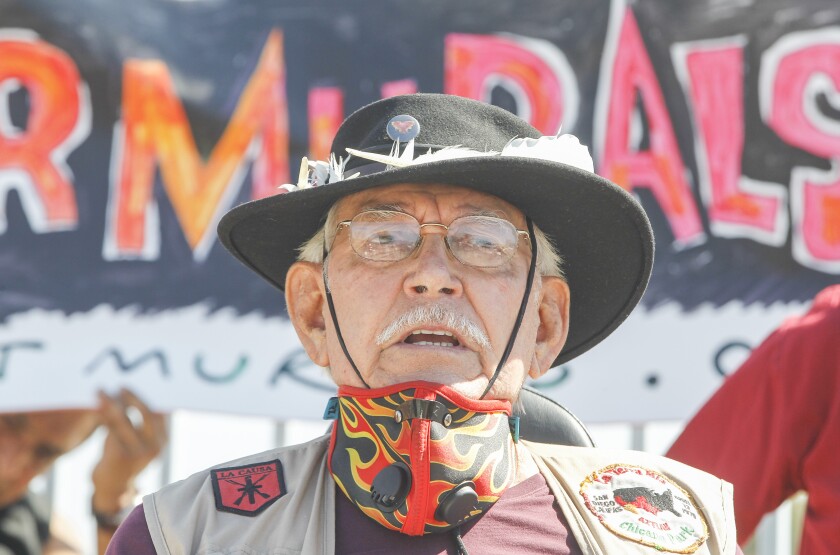 By KRISTEN TAKETA with the San Diego Union Tribune

Community members tried unsuccessfully to stop the demolition of a 32-year-old mural painted by a renowned San Diego Chicano artist at Memorial Prep Middle School in the Logan Heights neighborhood.

The school building bearing the mural was torn down Wednesday afternoon despite a community member, Encanto resident Monica Bernal, holding a spontaneous sit-in protest at the demolition site for about an hour, before being taken away by police.

The muralist, Salvador Roberto Torres, an influential artist who helped create Chicano Park in 1970, wrote to school district officials this week trying to enforce what he said is his right to remove the mural before it was destroyed.

San Diego Unified officials said the mural could not be saved because it was painted on a classroom building that contained a lot of asbestos. Breaking into the wall to preserve the mural would have released the hazardous material, officials said.

District officials said the mural has been documented and will be recreated at the new school site after it’s constructed.

Still, community members saw the destruction of the mural as a loss for Chicano culture and the community’s history.

Bernal, an Encanto resident who grew up in Sherman Heights and went to Memorial Prep, said she sees it as another form of erasure of history and culture in an area that is being gentrified.

“It’s an erasure of who we are,” she said. “Those murals are who we are. They tell our history.”

The mural was painted around 1988 by Torres, who co-founded the Centro Cultural de la Raza and spearheaded a murals project at Chicano Park starting in 1973. The park now holds the largest collection of Chicano murals in the world, according to the UC Santa Barbara Library.

The mural on the school featured a diverse group of Memorial students and graduates, veterans of World War I, and Sharon “Christa” McAuliffe, a teacher who became an astronaut and who died in the 1986 space shuttle Challenger crash.

“It’s a joyful, important, colorful mural that I enjoyed making,” Torres said at a press conference Wednesday morning in front of the demolition site.

There are at least three other murals in addition to Torres’ at Memorial Prep: two murals by Sal Barajas and one by Mario Torero. Torero’s mural, located in the school library, is the only one that could be saved because it was painted on removable panels.

“We want to take some control of our community through our art,” Torero said. “It’s history.”

Over the course of an hour Wednesday, police spoke with Bernal and tried to convince her to leave the site. She refused. Police then handcuffed her and carried her off site by her limbs, she said, and then gave her a misdemeanor ticket for failing to disperse.

San Diego School Police Captain Joseph Florentino said the last thing police wanted to do was put their hands on a peaceful protester. But he said Bernal endangered herself and others by being so close to the building, which was already partially demolished and was close to collapsing.

“It’s tough when a historical community landmark goes away. We respect that,” Florentino said. “It’s a tough one for everybody.”

The murals have been documented in high-resolution color and black and white photos in accordance with the Historic American Buildings Survey, said San Diego Unified spokesman Samer Naji. Those photos will be housed at San Diego Central Library, the San Diego History Center, and UC Santa Barbara Library Special Collections, which houses historical papers on Torres.

San Diego Unified School Board Vice President Richard Barrera, who represents south central San Diego, said he thinks replicating the murals is a better way to preserve them. He said the murals were painted on old, deteriorating walls, and the murals would deteriorate, too, if the district did nothing about it.

“These murals cannot be preserved forever,” Barrera said. “The way to actually preserve them is to replicate them onto spaces that can be preserved.”

Naji said that the Logan Memorial Educational Campus project has gone through years of planning, which included opportunities for community input. The public was notified more than a year ago of plans to demolish the school buildings, district officials said.

The demolition Wednesday was part of a massive renovation that will transform the Logan K-8 elementary school and Memorial Prep middle school into a complex that will serve children from infants to high schoolers.

The project will build Logan Heights’ first public high school, along with a Montessori program. The complex also will offer athletic fields, a health and wellness center, access to legal representation, counseling and dental services.

“We know that this is important to the community, and we know that the artist is really invested in this,” Naji said. “We really tried to look at every alternative, but this project really is so critical.”